QSA supports the launch of the Cotton Lives On™ recycling programme turning your old cottons into new products. 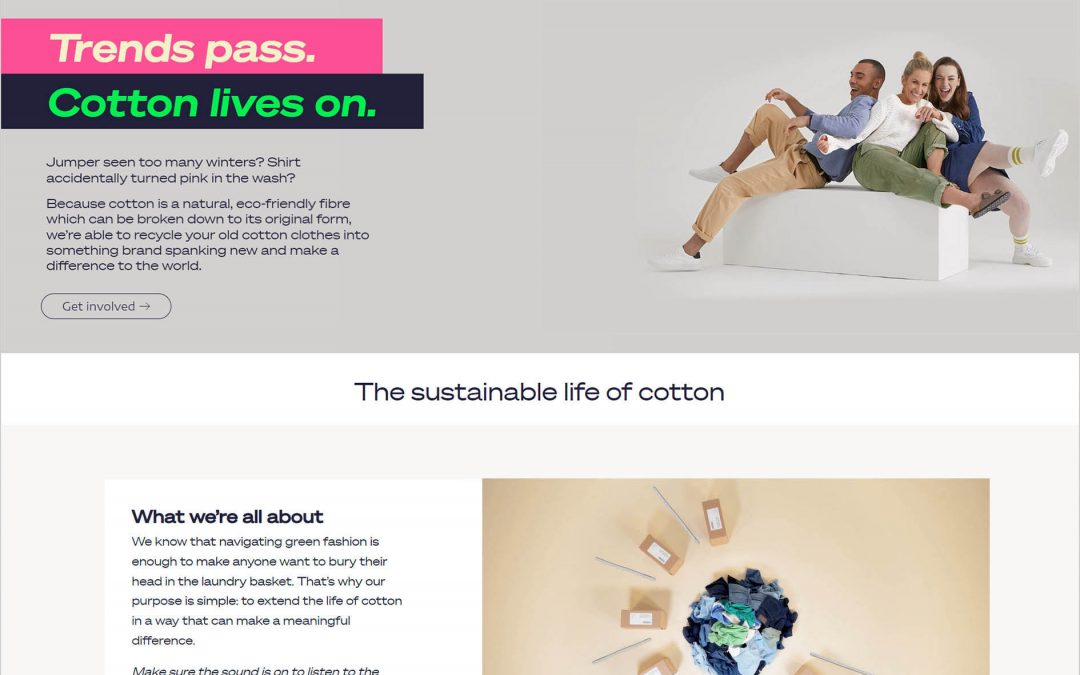 We are over the moon to be working with Cotton Council International to launch a new responsible fashion initiative, Cotton Lives On™,  which is being trialed for the first time in the UK where cotton clothing which is past its best is being made into roll mats for people at risk of homelessness.

We are working with fashion brands, retailers, reprocessors and bed manufacturers to prolong the life of cotton and repurpose it into something of benefit, instead of filling up landfill sites.

Stephanie Thiers-Ratcliffe from Cotton Council International highlights that “a staggering £140bn worth of clothing is sent to landfill each year. We want to significantly reduce this amount and turn the cotton into something that keeps the fibre in use for as long as possible”.

Our project lead, Kristina Bull says “the project is about extending the life of the clothing. We don’t want items that people can sell and give new life to, this project is for clothing which has holes in which really has reached the end of its use. So much goes into landfill and what we’re trying to do is make as much use out of the resource as possible by turning it into something useful.”

Launched in June, people can post their unwanted cotton items via the post office for recycling. In the autumn people will also be able to drop off their garments at brand and retailer stores across the UK. The cottons will be processed into an insulation pad which is used to make roll mats which a portion will be provided to organisations such as Shelter, Refuweegee and Single Homeless Project.

Kristina added: “It’s a really simple process and something which makes so much sense, yet each year 336,000 tonnes of clothing goes into landfill in the UK. In the same way people know to recycle plastic and glass, we want more people to know good stuff can come from their unwanted cottons and make it more mainstream for cotton clothes and textiles to be recycled.”

“It’s brilliant to be part of a sustainable initiative like this that helps the planet and people experiencing homelessness at the same time. Knowing you have a safe and comfortable bed to sleep in at night means one less thing to worry about and you can focus more on what’s important to you in living a more independent and fulfilling life. Every year, we help over 10,000 Londoners to leave homelessness behind and these roll mats will certainly help us in this.”

I specialise on working within an organisation which has included my tenure as sustainability specialist at EDF New Nuclear Build and at WRAP developing their Textiles 2030 agreement and produced their 2030 circular textiles pathway working with the major retailers, reuse & recycling businesses and charities.

Prior to QSA, I was an associate director at Mace Group where I enabled built environment clients to deliver their carbon reduction programmes and sustainable construction strategies by setting measurable KPIs and targets; creating tools to monitor; embed performance standards in procurement and communication.

Previously, I led the Sustainable Clothing Action Plan at WRAP setting the 2020 targets, strategy and implementation for the UK clothing industry.

I led our project with Laudes Foundation and ReLondon on the Circular Fashion Fast Forward project that saw us develop circular models with adidas; FW and Farfetch as well as lay the foundations for Ted Baker’s work in this area.

I am leading the development of a fibre specific recycling programme within Europe which will be launched in early 2022.

I am an apparel durability expert with track record of change implementation at Whistles, ASOS, COS and worked with WRAP and John Lewis to produce a durability and quality guide for brands.

I have advised low carbon, resource efficiency and sustainability strategy development at Heathrow and High Speed 1 Ltd, and continue to lead the support work for HS1 through to their participation at COP26 in November 2021.

Before QSA at WRAP I delivered the market engagement and recruitment drive for the WRAP Halving Waste to Landfill agreement in the built environment sector.

I have a strong track record in sustainability with a wide range of clients. My original background is in process and chemical engineering so I’ve been in to process and resource efficiency since graduating a long time ago!

I have extensive experience working with electrical and electronic products, and I worked with many major global brands on improving design for durabiltiy and repairabilitly. Examples of projects I led include:

Through my past work at WRAP and beyond, I’ve also advised a range of governmental and NGO organisations on resource efficiency, ecodesign and circular economy including Defra, BEIS, Zero Waste Scotland, ReLondon and Oxfordshire County Council. I provide technical advisory and independent expert advice to UKRI, the European Commission, the US Government’s Department of Energy.

I get a kick out of helping businesses understand and meet their customers’ needs better - whether that’s through better business models, better product design or better communication and transparency.

This has also led me to take an interest in privacy and data management - which can be a big barrier to people reusing and recycling some of their old electrical stuff. As a result, I set up a business called Astrid to provide cost-effective privacy advice to small businesses so they can better protect their customer information.

I specialise on the innovation and proposition development of new customer orientated, commercially driven circular and sharing business model to market. I have a particular experience of working on circular models with sectors that are impacted by the change in lifestyles, consumption, digital mobility, electric infrastructure and NetZero, on place. Examples range from retail; IKEA, adidas, B&Q, ASOS, FarFetch, developers and OEM’s; Landsec & Samsung, mobility; Riversimple, HS1 & Co Cars and authorities; Oxford County Council and Exeter Velocities/Exeter City Council. Across all of these, I have helped deliver the propositions, services, operations and infrastructure to enable deployment.

As a director of Co-cars, multi-modal shared e-mobility provider of EV cars, e-bikes and e-cargo bikes, I have first-hand experience of the impact and change this market can have on people and place, through working with local authorities and housing developers.

I understand what processes and techniques to apply, how to encourage growth and change mindsets, and how to build a customer-focused, commercially viable business model that delivers circular and environmental benefits. My background is business development, technology and markets having worked for international companies to local SMEs. I've worked in a wide range of projects from global business propositions, sales as a service, sharing and circular business models, ‘low carbon’ LEP economic strategies, climate change adaptation, renewable energy, clean tech sector development and public sector partnerships to technical research, international development and project delivery management.

Being a Fellow of the Royal Geographical Society and geographer at heart I've worked on sustainable development projects and film productions in locations in Africa, Asia and Europe.

This website uses cookies to improve your experience while you navigate through the website. Out of these, the cookies that are categorized as necessary are stored on your browser as they are essential for the working of basic functionalities of the website. We also use third-party cookies that help us analyze and understand how you use this website. These cookies will be stored in your browser only with your consent. You also have the option to opt-out of these cookies. But opting out of some of these cookies may affect your browsing experience.
Necessary Always Enabled
Necessary cookies are absolutely essential for the website to function properly. These cookies ensure basic functionalities and security features of the website, anonymously.
Functional
Functional cookies help to perform certain functionalities like sharing the content of the website on social media platforms, collect feedbacks, and other third-party features.
Performance
Performance cookies are used to understand and analyze the key performance indexes of the website which helps in delivering a better user experience for the visitors.
Analytics
Analytical cookies are used to understand how visitors interact with the website. These cookies help provide information on metrics the number of visitors, bounce rate, traffic source, etc.
Advertisement
Advertisement cookies are used to provide visitors with relevant ads and marketing campaigns. These cookies track visitors across websites and collect information to provide customized ads.
Others
Other uncategorized cookies are those that are being analyzed and have not been classified into a category as yet.
SAVE & ACCEPT
Powered by